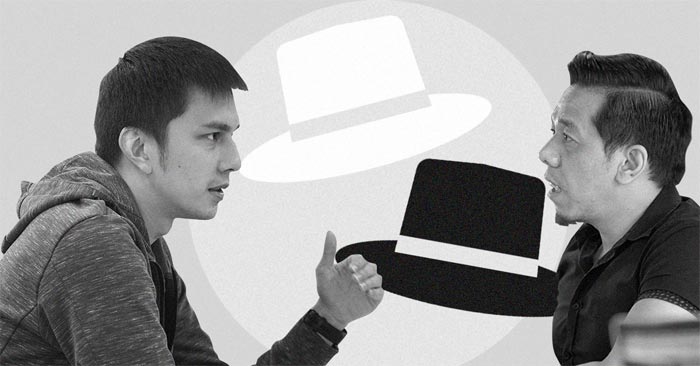 The goal of anyone using SEO is to ascend the search engine ranking ladder.

A study revealed that 67% of digital marketers said that SEO is the most efficient content marketing strategy. But not every type of SEO will achieve this. There is white hat and black hat SEO and knowing the distinction between these two is important.

By learning the differences, you can ensure you’re following the best search engine optimization practices to maintain the integrity, online rankings and visibility of your website.

What are the things you have to know before doing either of these techniques? Learn more about white hat SEO and black hat SEO with Truelogic Managing Partner Bernard San Juan III and SEO project manager Timothy Uichico.

Hi and welcome to another episode of the Truelogic DX podcast. Today, we’re talking about something that comes, you know, super easy to me. We’re talking about SEO. But we’re specifically talking about white hat and black hat practices. And you know, for some of you, the term might be familiar, but for some of you, it might not. So I brought in a resident SEO from Truelogic, one of our SEO project managers, guys, Timothy Uichico. So Timo, what are the top three practices that a business should do when it comes to SEO?

So for me, definitely content. Content is always king. So that includes having keywords on the URL, the meta title data, meta description, and H1.

When we’re talking about a technically sound website, it’s a website that can get indexed and crawled. For those who are unfamiliar, it’s basically you allowing Google to enter your website. Like Google is able to scan the web page and then make a copy of the webpage and then deposit it into its memory.

Link building is in itself a little bit controversial. Google doesn’t like it. You’ll meet a lot of agencies that allow SEO agencies that will say, you know, let’s do link building month on month, and then we’ll end up ranking. But it’s a good show of how popular your website is online.

White Hat SEO is the practice that Google has confirmed that they’re telling you to do because it’s beneficial for everyone.

Black Hat is things that are not within Google’s purview and could get you in trouble.

Full disclosure, we don’t do Black Hat on client websites but we are aware because we do experiments on Black Hat. If you’re serious about SEO, you want to test out what’s real or what’s not.

White Hat is essentially Google-acceptable practices and Black Hat is the stuff that Google says should not work and can get you in trouble.

It tends to be unethical, not illegal. There’s a difference, right? Google will not sue you for executing Black Hat techniques. But because it’s their index. It has the right to determine what stays in its memory and what gets purged. And if Google thinks you’re cheating, you get purged. There’s nothing you can do, it’s Google’s mainframe, right?

Google wants to serve the users. If your website satisfies a search motivation better than anybody else, why would they not rank you? Working in SEO, this is the one motivation that you have to figure out.

Is it White Hat or Black Hat?

Definitely Black Hat. It’s basically when you’re either hiding your content in terms of not letting the user see it, or the search engine can see it. It goes against a specific principle that Google has been reiterating throughout the years, that is to build for the user, not the search engine. Meaning, that in the end, someone landing on your page is a person.

The way for you guys to imagine that is when you set up a web page and the webpage has a thousand words of copy, but the normal person can only see 400. So the 600 words of the content are cloaked. They’re hidden. This is sneaky because the bot can see it. The bot can see HTML and people do not see HTML. So that’s cloaking.

Definitely Black Hat. When we talk about duplicate content, these are the specific websites that copy content from another. Basically, they’re not putting out anything original, or not even bothering to rehash it. They’re just copy-pasting. And this is obviously problematic because when you do a search query and then these websites appear, it does not give value to the users if the first five-ten results are the same.

If you’re ripping off somebody’s content, then you’re not really creating value for users. And this is the kind of duplication that Google will actually penalize.

Stuffing is basically when you put your content on, and then you just keep repeating the same keyword over and over in the hopes that your keyword density goes up, therefore, ranking higher on Google. No one wants to read content where you have the same keyword, in every sentence.

One of the other things that people used to do, and I think sometimes still happens is link manipulation. What you’re essentially doing is you’re relying on the relevance of another domain, another website and you’re trying to funnel that relevance to you. Especially if that previous website was not yours, or if that website is not even contextually related to you and you just really want the referring C-classes, backlinks.

However, this becomes valid when you pass page rank from one related asset to another. Take, for example, Globe linking to an Ayala property and an Ayala property to Globe. Or the Metrobank website to the Metrobank Cards website, or another subsidiary because they are related. And we also do this with websites that have country-specific sites.

Boiler plating is basically, on the footer of your website, you’re starting to link the pages you want to rank, and then passing on the (domain) authority to those pages.

Why do people do it? I think the easiest way to explain it is –that when you get a link from another website, it’s a popularity signal. But on-page wise, Google wants to know which pages are important to you for which ideas. And the more links that go to a specific page, the more Google thinks you showcase that page.

If there’s a page that is super important and we want people to go to that page, we put it on a site-wide element (does not necessarily have to be the footer).

White Hat. However, where some SEO (practitioners) might take it too far is when they start doing it on other websites they work on, on the footer of another website, which Google treats as a trust issue.

Is when you do a commercial query and the page that’s ranking is a 2,000-3,000 word blog. The intent of your keyword is commercial. It’s like typing flight trips to Hong Kong, and then landing on a blog that is 3,000 words about how to find a flight to Hong Kong.

This is not best practice but can be used as a tool when things aren’t working.

Black Hat. Age domain redirection is a technique where you buy an old domain that has authority, that has earned backlinks, and re-direct it to your new website. But the two of them are not related.

It’s different when it’s related. For example, bpiexpressonline.com when became bpi.com.ph.; it’s appropriate. That’s an age domain redirection, but that’s legit because they represent the same entity. But if they’re not the same entity, if you just bought a domain for the sake of acquiring the page rank, it’s black hat.

The general purpose of blog commenting is not a Black Hat technique. But the way SEO (practitioners) started using it, it got abused and became Black Hat. When you blog comment and add a link to a resource, it will help the user. However, when people started putting it everywhere, whether or not it’s related, it became bad practice.

White Hat. In general, when you do citations and you’re building it on legitimate websites (Yelp, Yellow Pages, Google My Business), that is building your digital footprint.

Social bookmarks are generally Black Hat. Similar to a blog comment, it started as a good idea. But as SEOs started placing bookmarks on every browser, it got abused.

If you ask Google, they’ll probably say they don’t like it. But you can’t argue that it drives the results. So it is Black Hat, but there is a proper way to do it. There is an organic way in which you are not paying the website or giving anything in exchange.

When we say guest blogging, a good example would be if a website like Knorr or Maggi, or Del Monte Kitchenomics, recommended a recipe to publish on Panlasang Pinoy. When Panlasang Pinoy publishes it, they credit the domain back with a link. And it’s not a commercial relationship. Del Monte doesn’t pay for that article getting posted on Panlasang Pinoy. They just believe in the recipe that Del Monte had submitted.

Internal linking and blogging, which are both on-page activities, can be included.

Meta title and meta descriptions, while many agencies offer them, they tend to forget that it’s not only about the keywords, it’s about convincing the person to click.

What happens when you do Black Hat techniques?

If you’re a legitimate company, if you’re someone that’s looking for mid to long-term goals, you should stick more to the White Hat. Black Hat is sort of a double sword. It’s eventually going to hurt you more than you gained from it.

2. You might end up having to abandon the domain that you’d already put in resources, time, and money.

In the same way that you wouldn’t gamble on building a shabby house, I will not gamble on Black Hat on a website.

PrevPreviousWhat’s in a Keyword?
NextFirst Impressions Last: Why Your Homepage MattersNext
Thank you for your interest